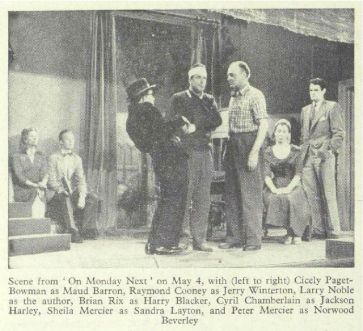 I am continuing to outline, in a list one hundred television stage plays, of a sketchy and tentative map of the history of the form. As before, I offer here ten productions that are among the most significant for a particular period of time. Some of the presentations no longer exist, and of the ones that are still in the archives, there are many that I have not (yet) seen.

There are certainly numerous important productions that I have missed or that I know nothing about. We intend to repeat the exercise next year (and the one after) when Amanda Wrigley and I will have spent a lot more time in the archives. Revisions and re-castings of the list will track how our knowledge, and that of our colleagues, develops. In the meantime, please use the comments below to point out my obvious omissions and idiotic inclusions.

Having reviewed ITV’s stage plays in the commercial service’s first decade, this post looks at the BBC productions during the same years. These are the final years when stage plays were integrated with the remainder of the drama output. Following the appointment of Sydney Newman as head of television drama in late 1962, stage plays were increasingly seen as most appropriate for prestigious ‘heritage’ productions, an attitude that was institutionalised in the Play of the Month strand from 1965 onwards. But at the end of the 1950s and in the first years of the 1960s stage plays remained central to the mainstream series, most notably Sunday Night Theatre, as well as featuring in more specialist groupings like World Theatre.

After making waves at Oxford, Tony Richardson joined the BBC in the early 1950s and began to direct dramas in 1955. One of his first stagings was this Othello with the black actor Gordon Heath. According to the essential BUFVC Shakespeare database, this was ‘the first televised version of the play to feature a black actor in the title role. Gordon Heath, an American, came to Britain in 1947 and was cast by Kenneth Tynan to play Othello in his 1950 Arts Council production.’

The BBC production was presented just as Richardson was forming the English Stage Company with George Devine. On May 8 1956 at the Royal Court Theatre he opened John Osborne’s debut play Look Back in Anger, which – if the myth is to be believed – changed the British stage forever. Meanwhile, his tale of the Moor (which survives in the archives) was lauded of by Philip Hope-Wallace writing in The Listener:

There were some very good points about Mr Tony Richardson’s production. The idea of picking the play out in black and white, with the least possible encumberment of ‘scenery’, was well thought and well executed. The close ups and the detail generally were mightily effective. […] Th[e] earlier part (and I think some later scenes, although all matched up well together) were not ‘live’ but filmed. I feel sure that this mixture is a good solution of the problem of multi-scenic costume drama. At any rate it worked well here. […] All in all, a distinguished event. (‘Drama: Blackleg!’, 22 December 1955, p. 1099) 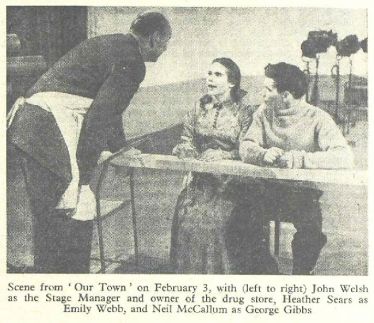 Frustratingly, this production has not survived, but it is one of the most intriguing presentations from these years. Alvin Rakoff staged Wilder’s home-spun corn, which dallies with ideas of theatrical illusion, in a television studio with lights, props and a very prominent stage manager. For The Listener, J. C. Trewin approved:

Our Town, on its journey through life and love and death – just that — is at once the simplest and craftiest of plays. It did the usual things to me. Being prepared, I was not alarmed by Alvin Rakoff’s transposition, his visible cameras, gantries, booms, and so on, the studied nonchalance that deepened suddenly and quietly to an elegiac mood. True, for one minute at the I was horrified by the sight of the studio and its resolutely natural crowd, that unpersuasive babble. […] As usual, we were faintly exasperated at first by make-believe with step-ladders and bean-stringing. But, before long, the place grew in the imagination: there were its people, toiling, rejoicing, sorrowing through the unadventurous years. (‘Our Studio’, 7 February 1957, p. 242)

My colleague Amanda Wrigley has written a detailed Screen Plays post about this controversial production. Amanda is currently exploring whether or not a recording exists.

34. Brian Rix Presents: On Monday Next by Philip King, directed by Henry Kendall, produced by Mary Evans, broadcast on 4 May 1958.

Farces broadcast live from London’s Whitehall Theatre with Brian Rix’s company were a key element of the BBC’s popular drama offering in the 1950s and 1960s. The relationship between the corporation and Rix’s company began in 1952 when the actor-manager negotiated a deal for the BBC to transmit one act of Reluctant Heroes.The West End Managers’ Association and other theatrical entrepreneurs like Bernard Delfont and Val Parnell were refusing to work with television, believing that exposure of a theatrical production would hit its box-office potential. Rix found exactly the opposite to be the case, and he continued to offer extracts of his productions to the BBC.

Starting in 1956 with Love in a Mist by Kenneth Horne (broadcast 29 January 1956), the company also presented full-length Whitehall productions, and these quickly became an established element of the schedules, often shown on Bank Holidays. Set in a repertory theatrical company, On Monday Next (pictured above) was a typical offering, and the critical response – as was the case for all the presentations of Rix farces – was mixed:

The Whitehall was the scene of last night’s performance on BBC Television [of On Monday Next] under Mr Henry Kendall’s direction, and Mr Brian Rix of that theatre himself played the lead in it, and did so very pleasantly. Yet the use of a stage, and the necessary compression, seemed to have been unkind to the play in it’s [sic.] new form. It was cramped in movement, and except for the part of the repertory company’s producer, played by Mr Rix), stunted in characterization. (Anon., ‘Too True to be Good’, The Times, 5 May 1958, p. 5)

[T]here were ninety minutes of calamity and chaos with Brian Rix in the centre of the scrimmage, a site to which he is well accustomed. My regret was that Joan Sims had a part far too small for her simpering comedy. There was nothing specially televisual about this affair: it was a stage-play directly screened to our armchairs. I did not want to leave mine. (Ivor Brown, ‘Tantrum and Chortle’, The Listener, 8 May 1958, p. 790)

Under Michael Elliott’s direction, the BBC’s choice of plays in the late 1950s and early 1960s was particularly adventurous, with presentations of numerous European classics. Not that this was always appreciated by even usually sympathetic critics:

Buchner’s Danton’s Death, recently acted on the stage at Hammersmith, did not add much to my knowledge of the French Revolution and had its monotonous aspects. But Michael Elliott’s use of his cameras covered its weaknesses and made it into effective television, with Patrick Wymark providing the genial courage and the biting speech of the doomed Danton. (Ivor Brown, ‘Round the Map’, The Listener, 28 May 1959, p. 958)

36. World Theatre: Mother Courage and her Children by Bertolt Brecht, produced and directed by Rudolph Cartier, broadcast on 30 June 1959.

Presenting Brecht’s wartime epic was another example of Michael Elliott’s bold strategy, which would effectively be brought to a close with the arrival of Sydney Newman.

This was a bold an intelligent production of a great work which, I believe, has only once before been professionally played in English in this country. That said, it remains to make the ungrateful observation that the production was centrally flawed by a persistent distortion for which the director and the adapter (Eric Crozier) must share responsibility. It was, above all, with their production of this play in London three years ago that the Berliner Ensemble won for Brecht delayed recognition: audiences were delighted to find it far more directly expressive than had been suggested by the prophets of the V-Effekt and A-Effekt. Mr Carter and Mr Crozier carried this reversal to the limit by ignoring the anti-illusionist for of the play altogether. (Irving Wardle, ‘Strong Women’, The Listener, 9 July 1959, p. 72)

There is much more to write about this important production, which I intend to do after I have had a chance to view the archive recording.

37. An Age of Kings by William Shakespeare, directed by Michael Hayes, produced by Peter Dews, broadcast in 15 parts from 28 April 1960.

38. Waiting for Godot by Samuel Beckett, produced and directed by Donald McWhinnie, broadcast on 26 June 1961.

This is yet another production of which no copy appears to survive, and for the assessment of which we have to rely in large part on the responses of contemporary critics.

Television by its nature is a great underliner of motive, and Mr McWhinnie, who produced the play in sound about a year ago, made full use in television on June 26 of the close-up to catch the facial reactions of his players as their minds raced along. Jack MacGowran as Vladimir and Peter Woodthorpe as Estragon have mightily expressive faces, and the contrast between the quicksilver, mischievous inquisitiveness of the one and the patient, affectionate, tragic acceptance of the other was powerful and effective. As we spent so much time near to the eyes of these two, held in within the close barriers of the place of appointment, the retreat of the camera eye when night fell and at the ending of the play was moving in itself. The last sight of them, diminished in size and doubtfully deciding to give up and go, had a special pathos. (Frederick Laws, ‘Hunt the Thimble’, The Listener, 6 July 1961, p. 34)

The perils of trying to compile a list of every British television production of a stage play are illustrated by this presentation. It might appear to an adaptation taken from Tolstoy’s novel but in fact it is a version of a French stage play that itself re-worked the Russian epic. As a DVD release a year ago demonstrated it is also an engaging entertainment, choreograph with great skill by Rudolph Cartier and featuring an engaging performance from Sean Connery as Vronsky. But its truly distinguishing component is a luminous central performance by Claire Bloom, which as I wrote in an Illuminations blog in October 2010, is ‘built on a complicity with the cameras fascinated by her face and her body’. My original post features a number of framegrabs and is complemented by a second post about the presentation and packaging of the DVD.

40. The Cherry Orchard by Anton Chekhov, produced and directed by Michael Elliott, broadcast on 13 April 1962.

This is another classic production that demands extensive attention. It is a studio version of Michel Saint-Denis’s much-praised production for the Royal Shakespeare Company, and the casting is exemplary: Peggy Ashcroft, Judi Dench, John Gielgud and Dorothy Tutin. The recording is one to which we will most definitely return.