As I have been compiling our first list of one hundred television plays (part four is here) I have come across both single dramas and groups of plays about which I previously knew nothing. One of the most interesting of the latter is the collection of ‘Manchester repertory plays’ produced by Granada on an occasional basis between 1958 and 1962. These were highly-praised adaptations of dramas associated with Annie Horniman’s Gaiety Theatre in the years between 1908 and the First World War.

Twelve broadcasts were made of Gaiety plays or of plays by writers closely associated with the theatre. The adaptations were mostly by Gerald Savory from originals by Harold Brighouse, Stanley Houghton, Allan Monkhouse and Elizabeth Baker, and the scripts of six (although not those by Elizabeth Baker) were published as Granada’s Manchester Plays (Manchester University Press, 1962). The productions were recognised both as celebrations of regional identity and as precursors of contemporary writing by authors such as Arnold Wesker, Alun Owen, John Osborne and Shelagh Delaney. This post is offered simply as a first note about the productions (at least three of which survive), but they most definitely deserve further research. 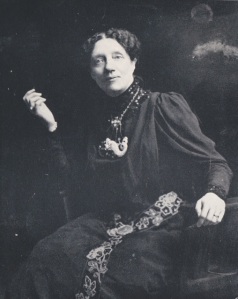 Annie Horniman (1860-1937) was the only daughter of the tea merchant Frederick John Horniman who founded the Horniman Museum in south London. She attended the Slade School of Fine Art and fell in love with the theatre, eventually subsidising the founding of Dublin’s Abbey Theatre in 1904. But she fell out with the founders, who included W. B. Yeats and J. M. Synge, and moved on to Manchester. The theatre director Peter Cheeseman celebrated her work in the Oxford Dictionary of National Biography:

Annie Horniman’s greatest achievement was embodied in management of the Gaiety Theatre, Manchester, which she bought, renovated, and opened in 1908 with money left by her father, while still attending to the rumbustious affairs at the Abbey. With the young actor-director Ben Iden Payne she created an acting ensemble on forty-week contracts, with no star system, and the actors alternating between large and small parts. Dedication to the author was paramount. Shakespeare, Euripides, the ‘new drama’ of Ibsen and Shaw, local dramatists such as W. S. Houghton and Harold Brighouse, culled from over forty new plays she read every week, played in a repertory system, not straight runs. Wages were fair. Annie’s organization was disciplined, just, happy. (‘Horniman, Annie Elizabeth Fredericka (1860–1937)’, Oxford Dictionary of National Biography, Oxford University Press, 2004; online edn, May 2009)

The First World War significantly disrupted the work at the Gaiety, and Annie Horniman retired from the theatre’s management in 1921. She is acknowledged now as the founder of the repertory theatre movement and her example inspired similar theatres in Glasgow (opened 1909), Liverpool (1911), Birmingham (1913) and elsewhere including, following two tours by the company in 1912 and 1913, across North America.

The volume Granada’s Manchester Plays carries a short anonymous ‘Preface’ which was almost certainly written by Gerald Savory. Here the writer explains Granada’s decision to mount a production in 1958 of one of the plays associated with the Gaiety:

September, 1958, was the fiftieth anniversary of Miss Horniman’s opening of the Gaiety. Granada TV Network, being a company which serves the North of England, and which has its TV Centre and main offices in Manchester, decided to celebrate the occasion by producing a Manchester School play on television. It seemed to safe and conventional a choice to revive Houghton’s Hindle Wakes or Brighouse’s Hobson’s Choice – the two plays of the School which have maintained their popularity to the present day. So the play chosen was Monkhouse’s Mary Broome. (p. vi)

The Times hailed both what it described as ‘a beautifully cast production’ and the interest of the drama itself:

The play epitomizes the virtues of the Manchester dramatists. Its realism, in a setting of remarkable ugliness, is the instrument of profound moral curiosity which saves the writing from the unendurable bleakness that beset some of Monkhouse’s contemporaries. And besides its comment on pre-1914 society, the play startlingly foreshadows the realist drama of our own time.

Such was the success of Mary Broome that Granada continued to mount two or three adaptations of Manchester Repertory plays for the next four years. The list of productions that I have been able to identify to date, along with the credits that I know currently, is as follows:

By the time of the broadcast in November 1960 of Houghton’s Independent Means The Times could write, ‘One is growing almost tired of saying how good Granada’s series of vintage dramas from the Manchester school are, but then there is no monotony more acceptable than a monotony of excellence.’ (Anon, ‘Husband and superwoman’, 4 November 1960, p. 16)

Adapting the plays for contemporary audiences

Each of the plays was substantially edited to fit a one-hour broadcast slot, and other changes, in some cases significant ones, were also made to the casts and settings of the originals. The writer of the ‘Preface’ to Granada’s Manchester Plays outlines some of the thinking behind the amendments.

Since the scope of the television medium is more complex, larger, more fluid and sharper [than that of the theatre], it means, in practice, that valuable scenes which, perforce, were only mentioned in the original theatre text can be included with great effect; entrances and exits, unless actually indicative, can be dispensed with, and only the central pith of the scenes retained; facial expression or silent action can effectively be substituted for words, while camera direction can often be used more easily to evoke the mood or establish the setting, than any descriptive dialogue. (pp. vii-viii)

Several of the reviews of the plays in The Times (which covered eight of the twelve dramas) mentioned parallels to be discovered in some of the plays with the vibrant British theatre that had developed in the wake of the English Stahe Company’s success in 1956 with John Osborne’s Look Back in Anger. The ‘Preface’ also engaged with the echoes of themes and concerns from the Manchester plays in the drama of the day and in the writing of other young authors:

In fifty years the wheel has come full circle. Once again our best young writers are demonstrating that there is more to England than just London, and that the upper class is not the only one worth writing about: Arnold Wesker with Roots, Alun Owen with Progress to the Park, Shelagh Delaney with A Taste of Honey, Alan Sillitoe with Saturday Night and Sunday Morning. And once again the conflict between the older and younger generations has sharpened and become one of the prime dramatic themes of the day. The playwrights of the Royal Court and Theatre Workshop challenge and defy the elders in authority, as the playwrights of the Gaiety did in their way and in their time. (p. vii)

The contemporary resonance of these plays from the past was also heightened by the casting of actors who at the time would have been associated with the ‘new drama’ of the day. George Devine, artistic director of the English Stage Company, starred in Vitriol, and Robert Stephens, a regular during the English Stage Company’s first season at the Royal Court Theatre in 1956, had a central role in Mary Broome.

Granada’s Manchester Plays was also addressed specifically to this present and indeed the future:

The publication of this book is not meant as an act of piety, but as an encouragement to the young Northern writers of today to come forward and speak. The platform is theirs. (p. vii)

Mary Broome, The Younger Generation and Hobson’s Choice appear to have survived in the archives, and so my next step in exploring this intriguing group of plays is to search out the recordings.