In the beginning: scenes from Cymbeline (BBC, 1937)

Short scenes from Shakespeare’s plays were broadcast on a number of occasions in the first year after the start in November 1936 of BBC Television’s service from Alexandra Palace. The first presentation was a scene each from As You Like It and Henry V on 5 February 1937. Margaretta Scott played Rosalind in the former, while in the latter the wooing of Katharine by Henry was acted out by Yvonne Arnaud and Henry Oscar (who had first appeared in a Shakespearean role at the Memorial Theatre, Stratford in 1911).

Later that year, Cymbeline was perhaps a less obvious choice of play from which to draw extracts for the television audience, but there was a production running in Swiss Cottage, London, at the Embassy Theatre, then being operated as a successful repertory house by Ronald Adam. There appears to have been little long-term drama planning at this time and Alexandra Palace producers worked with an opportunistic sense of what they might bring to the studios. On 29 November 1937 nine actors from the Embassy company assembled at Alexandra Palace for rehearsals at 10am and later in the day performed scenes from their production for roughly thirty minutes at 3.30 and at 9.30pm. As with all pre-war television, no recording was made, but there is a production file in the BBC Written Archive Centre which contains, along with other documents, a script with camera directions (WAC T5/121).

Nearly twenty years later, on 30 October 1956, scenes from Cymbeline were once again given on BBC Television, this time from an Old Vic production with Barbara Jefford and Derek Godfrey that was re-staged in the studio at Lime Grove. Again, no recording exists of the production, but a camera script does – and this facilitates a detailed technical comparison between the two presentations. This post outlines what we know of the earlier production, while a subsequent one will consider the 1956 version and begin to explore the similarities and differences, as well as the development of studio drama techniques across the first two decades of the medium.

Scenes from Cymbeline in 1937

André van Gyseghem‘s production of Cymbeline for the Embassy Theatre opened on 16 November 1937, just thirteen days before the television broadcast. Van Gyseghem had been a member of the Embassy’s rep company and then a director there for four years until October 1934, after which – as a committed Communist – he had spent a year in the Soviet Union studying Russian theatre techniques. His staging of Cymbeline is notable as being the first to use George Bernard Shaw’s variation for Act V, written by the playwright for the Memorial Theatre at Stratford but which had not been played there. According to Shaw’s biographer Michael Holroyd, this new writing ‘makes short work of the “ludicrous” battle sequences, jettisons the masque, banishes all apparitions, gods, soothsayers, and, condensing five scenes into one, straightens out Shakespeare’s meanderings in little more than twenty minutes.’ (Bernard Shaw, London: Vintage, 1998, p. 717) 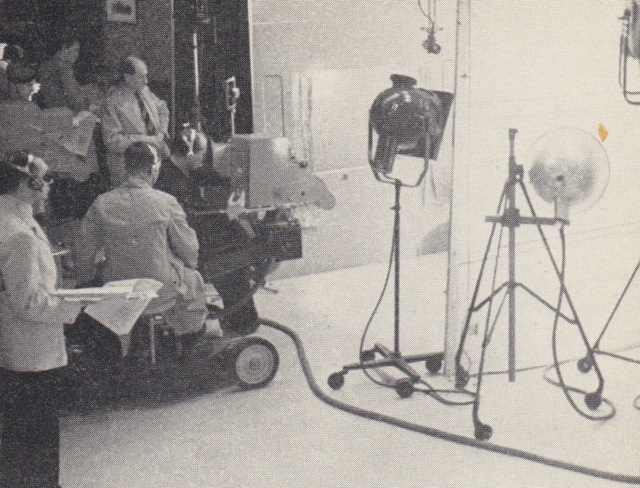 Not that the television audience would have been concerned by Shaw’s tinkering, for the broadcast scenes were selected only from Acts I and II. The presentation began with a music cue played from a 78rpm twelve-inch disc of the London Symphony Orchestra playing Rimsky-Korsakov’s Cortege des Nobles (the HMV serial number, D1984, is recorded in the script). The announcer spoke over the simple caption ‘Cymbeline‘: ‘Now we are to see scenes from Andre van Gyseghem’s production of Cymbeline from the Embassy Theatre (by permission of Ronald Adam).’

With the caption still on screen, the minor actors were introduced by name before a mix took the viewer to a shot of one actor accompanied by an explanatory voice-over – ‘Iachimo is played by George Hayes’, and then another mix to a shot of three characters: ‘The Queen by Olga Lindo, Posthumus by Geoffrey Toon and Imogen by Joyce Bland.’ The next mix took the shot to a further caption – ‘The Palace Garden’ – and then the television image returned to the previous three-shot. On a cue from the cameraman, the Queen began to speak. Each of these mixes at this time would have taken four to six seconds to complete; cutting live between studio cameras was impossible until after World War Two. 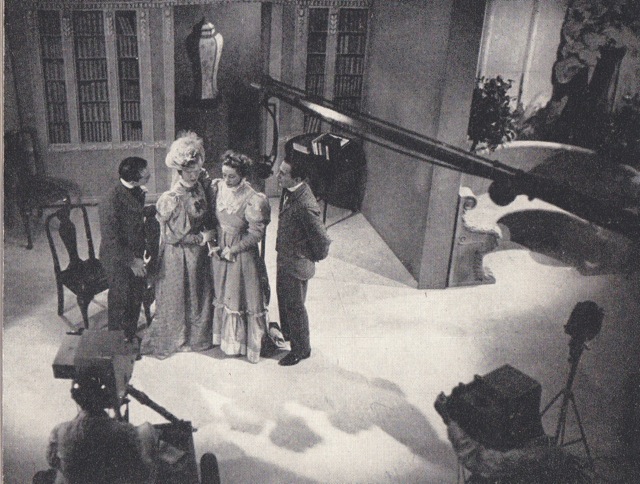 Studio drama broadcast of The Importance of Being Earnest, December 1937

The first scene was drawn from Act I Scene 1 and ran from the entry of the Queen, Posthumus and Imogen at line 79 through to the end of the scene – a total of 134 lines. Throughout the text in the camera script follows almost exactly Shakespeare’s text in the First Folio with no cuts. After the repeat of the caption ‘The Palace Garden’ and a brief music cue (from a record), Act I Scene 3 was played in full with Imogen, Pisanio and, for the final lines out of the total of 48, a Lady. Each of the scene transitions was marked by a further music cue.

Both of these ‘Palace Garden’ scenes were acted in the No.1 studio (there were two at Alexandra Palace) in front of a minimal setting. According to a scenery list in the WAC file, there was a back-drop, two sections of balustrading, a semi-circular seat, three trees in tubs, an arch-piece and two three-foot flats. Both garden scenes were also covered by just two fixed-lens cameras, both of which were mounted on dollies allowing forward and backward movement. In the first of these scenes, which might have lasted perhaps six minutes, there were just four shot-changes by mixing from one camera to the other; the second, which would have run for between two and three minutes, was played in a single shot.

As a caption informed the viewer, the scene shifted to ‘Philario’s House in Rome’ for Act 1 Scene 4, the 124 lines of which were also given in full. The location of the shoot also changed to studio No. 2, where cameras No. 3 (fixed in place on an ‘iron man’ mounting, and also doing duty for the captions) and No. 4 (on a dolly) covered what was more than five minutes of drama with just two shot changes. Almost the whole of the scene, which involves four speaking parts and two non-speaking, was played to camera no.4. The austere setting featured two five-foot flats, an archpiece as a doorway, a statue of a boy on a low pedestal, plus an oval table and three chairs that had been used previously in a scene from Hamlet. There were also some cups that had been supplied by the Embassy Theatre.

On to ‘Imogen’s Bedroom’ and back to studio 1 for, first, the exchange known as the ‘wooing scene’ that is Act 1 Scene 6 (239 lines, nearly ten minutes), and then the famous ‘trunk scene’ which is Act II Scene 2. This latter comprises just 53 lines and lasts for perhaps something over two minutes on screen. Here there were two five-foot and two three-foot flats, arch-pieces to suggest a window and a door, a bed with pillasters, a low pedestal with two candles and a special trunk supplied by the Embassy Theatre. The first scene saw only two mixes, with the shot changing only briefly to camera No. 2 and then returning almost immediately the main cameras.

The second of the bedroom scenes, however, featured three changes of shot in less than a quarter of the time of the first. Also, during the scene transition, in addition to the repetition of the caption, there was a brief superimposition of a no. 1 camera shot of the trunk onto a wider shot of the setting from camera no. 2. This was to establish the importance of the trunk, from which Iachimo emerges to declare his love for Imogen before then hiding himself within it once more.

The final scene returned to ‘Philario’s House in Rome’ for Act II Scene 4, the first 192 lines of which were played – which might have lasted a further six minutes or more. The whole of this scene appears to have been shot by camera no.4, before two simple captions at the close: first ‘Cymbeline‘, followed by ‘Presented by Royston Morley’. The timings, of course, are approximate, but if the presentation did indeed play its total of 790 lines in thirty minutes – an average of twenty-six lines per minute, not allowing for breaks or music – the verse-speaking would most certainly have seemed very fast.

Judged by later standards, the visual rhythm – in contrast to the verse-speaking – would have seemed funereally slow. There were perhaps just twenty-five shot changes during the whole half-hour, and half of these were accounted for by captions. We can begin to sense how very different was the visual grammar of early television from that which we are used to today. When we look in the next post at the wooing and trunk scenes from Cymbeline as presented in 1956, we will see how significantly this grammar had changed in just twelve years of transmissions.

One thought on “In the beginning: scenes from Cymbeline (BBC, 1937)”