Postscript to The Serpent Son: Of Mycenae and Men (BBC, 1979)

I recently wrote about a 1979 BBC production of the Oresteia trilogy which went by the name of The Serpent Son. The director was Bill Hays (1938-2006; obituaries here and here), who worked in both television and theatre. Richard Broke produced. Humphrey Searle (1915-1982) composed the music. It featured an impressive cast — the lead roles were played by Diana Rigg (Klytemnestra), Denis Quilley (Agamemnon), Helen Mirren (Kassandra), Anton Lesser (Orestes), Maureen O’Brien (Elektra), Claire Bloom (Athene), John Nolan (Apollo) and Flora Robson (Kilissa), with Billie Whitelaw leading the chorus of women in Grave Gifts and Siân Phillips leading the chorus in Furies.

What is fascinating is that the last part of this television trilogy — which went out on Wednesday evenings — was followed a couple of days later by a half-hour modern comedy written by the translators of the Oresteia, Frederic Raphael and Kenneth McLeish. Of Mycenae and Men was transmitted at 10.15pm on 23 March 1979 and it was directed by Hugh David (1925-1987). It follows the reunion of Helen and Menelaus, played by Diana Dors and Freddie Jones respectively, after the fall of Troy. As an original television play, Of Mycenae and Men lies beyond the methodological net of Screen Plays, but I thought it would be nice to write about it as a postscript for the holidays.

In its place after the tragic trilogy, Of Mycenae and Men takes the form of a kind of satyr play. In 5th-century BC dramatic festivals at Athens it was conventional for tragic playwrights to follow their trilogies with a fourth drama — a satyr play. For example, Aeschylus’ Oresteia trilogy of 458 BC was followed by the satyr play Proteus (which has not survived). Satyr plays are so called because the chorus was made up of satyrs — part-human, part-animal followers of Dionysus ‘whose dancing and singing were in vehement contrast with the tone, style, music and costume of the choruses of tragedy’ (Pat Easterling, ‘A Show for Dionysus’, The Cambridge Companion to Greek Tragedy, ed. by Pat Easterling, p. 38). The purpose of satyr plays is not precisely known but they may have been intended to give the audience some release after watching the often harrowing events and big issues of the trilogies, or just to remind them about the good things in life (food, sex, laughter). 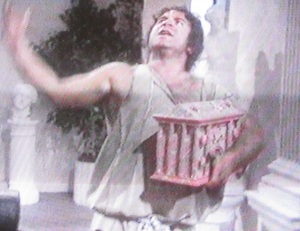 As may be expected, Of Mycenae and Men is in a very different vein from The Serpent Son. It opens with modern Greek music and seagulls in the background, and we soon discover that it’s a gentle, funny parody of Agamemnon, the first play in the Oresteia trilogy.

Agamemnon opens with a Watchman on the roof of the palace of Argos, at night, looking for a fire-signal to indicate that the Greeks have conquered Troy and that Agamemnon, his master, is on his way home. By contrast, Of Mycenae and Men opens with Bob Hoskins (pictured, holding his ‘classical’ radio set) as Mr Taramasalatatopoulos, a servant of Menelaus who is Agamemnon’s brother and the husband of Helen, the cause of the Trojan War. He walks up and down a veranda, ostensibly sweeping up but managing to keep a beady eye on whatever is happening below. After a minute or two, he addresses the camera directly:

Ten years have passed — well, plus a day or two to avoid undue coincidence — since the great avenger, Agamemnon, lord of Argos went forth to do battle, and to do Priam, the King of Troy and father of Paris — nah, not Paris, France: the other one! — including several other key characters. Hector, who Achilles slew before he got it in the heel himself as destiny decreed.

He is cut off by the sound of trumpets coming from the radio. A very BBC voice — played by Corbet Woodall (1929-1982) who was a genuine newsreader as well as an actor who took newsreader or announcer roles — declares, ‘And now for the very late, indeed ancient, news. In Argos, preparations are complete for the return today of lord Agamemnon, Grand Admiral of Greece. The mysterious outbreak of a chain of fires last night from Troy all the way down to the Saronic Gulf is still being investigated. Suggestions that vandals were responsible are being discounted, since Vandals haven’t been invented yet.’ The presence of electronic devices such as a radio set and, as we shall see, a telephone (dashes of the burlesque clash between ancient setting and modern contrivance) render the Agamemnon’s series of beacons between Troy and Argos relaying news of the fall of Troy unnecessary, and so it is parodied with the help of an amusing aside about the East Germanic tribe of around the 5th century AD not having ‘been invented yet’.

Hoskins then continues to address the camera with words which are evocative of the first chorus of Agamemnon:

Agamemnon, Priam, Hector, Achilles — war-lords all, heroes with undying fame […] Ten years have passed — I’ve said that before, haven’t I? — since the twin lords, Agamemnon, Menelaus, royal eagles paddling in the sky … well, so we’re told … went forth to recover Helen from Paris. Oh yeah! Helen of Troy!

Hoskins relates briefly how Paris took Helen off to Troy and continues to chatter on to the camera, comparing his wife to Helen (‘I wouldn’t mind a piece of her action, I don’t mind tellin’ you’) and drinking his Ouzo. The front door opens, he rushes forth and clasps Helen tightly: ‘Oh master, master, let me wrap my arms around your well-loved body, let me hug you to me, and let me cover those well-worn cheeks with kisses of remembrance’, he opines, only to be told ‘I am not your master, I am your mistress’. ‘Worth a try’, he says slyly. (In the previous year, 1978, Hoskins had played the role of salesman Arthur Parker in Dennis Potter’s drama Pennies from Heaven and that of Iago in Jonathan Miller’s Othello for BBC Television Shakespeare. The year following, he would appear in the film The Long Good Friday.)

The relationship between Menelaus (played by Freddie Jones, 1927-) and his long-lost wife Helen (Diana Dors, 1931-1984) is not what you might call harmonious. ‘Wouldn’t you have left?’, she says to camera at one point. Menelaus urgently wants to consummate their reunion, but all Helen wants is a bath. The bathroom, however, is undergoing some work, prompting her to complain that in Troy everything worked smoothly. ‘Ah, yes’, Mr Taramasalatatopoulos notes, ‘but this is Greece, m’lady. It’s more famous for British Museum-pillaged temples and largely inadvertent incest that American-style plumbing.’ Menelaus asks why the work is taking so long, to which Mr Taramasalatatopoulos replies, ‘Queen Clytemestra’s gazumped us, m’lord. She’s having a bathroom fitted in the royal palace’. And thus we have a parodic mirror of, and reference to, Agamemnon meeting his death in the bath at the hands of his wife Clytemnestra.

In a Carry On-esque scene where Menelaus’ rising desire is countered, but not thwarted, by Helen’s weary rebuttal, he recalls how, in the moment he first laid eyes on her in Troy, her beauty overpowered his desire to punish her: 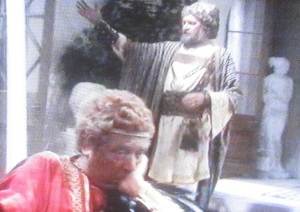 ‘Could that be the post?’, they wonder, as a traditional tragic Messenger arrives utterly out of breath. Eventually he breaks into a parody of an old-style verse translation of a Messenger Speech, a device used in tragedies to update the characters on action which has taken place far away or within the palace: ‘From Egypt have I come, a stranger, land of the heaven-fed Nile to well-horsed Argos (not necessarily in that order). Fair news bring I’. After a bit more in this vein Menelaus tries to shut him up, but the Messenger complains wretchedly, ‘I’ve over two hundred lines to go!’ Not knowing he is speaking to Menelaus, he goes on to relate his imminent arrival from Troy, with Helen (‘comely to look upon but not too choosy in the bedroom’). Menelaus threatens to kill him, to which he responds comically: ‘Greek drama will come to a halt. Generations of scholars unborn will curse your name! But why deny yourself descriptions of things too expensive to be staged with these rudimentary resources?’

Similar identity confusion occurs when Kassandra (played by Annette Crosbie, 1934-) enters, wailing and announcing (much as she does in Agamemnon), ‘Death in the palace! Ancient chickens coming home to roost!’ When she warns them to ‘Beware the bathhouse!’, Menelaus says as an aside to Mr Taramasalatatopoulos, ‘She couldn’t be the plumber could she?’ ‘Nah’, responds Mr T., ‘he’s coming Monday, squire, he promised.’ Soon Menelaus, realising she has the wrong house, stops her and says, ‘Er, they’re up the road’, referring to Agamemnon’s palace.

Menelaus again tries to get his wife into the bedroom (‘I shall have my reward for forgiving your long years of Paris by night!’) but she delays, thinking it a good idea to have Agamemnon and Clytemnestra (her sister) over for dinner. ‘I’ll just give Clytie a call’, she says, asking the operator for ‘Mycenae 1212’. ‘What do you mean he’s feeling out of sorts? He’s just conquered Troy!’, Helen says to her sister. To Menelaus, she says ‘Aggy’s feeling a bit stiff after his journey’ (an allusion, for the audience, to his rigor mortis). ‘He’s not the only one …’, Menelaus wearily replies, alluding to his own predicament. Eventually, they quarrel and he phones Paris: ‘Take her back. She’s all yours!’

Of Mycenae and Men is quite funny, but it’s difficult to see it working unless the viewer has seen The Serpent Son or has some knowledge of the myth. It has, perhaps surprisingly, made it into the Radio Times Guide to TV Comedy where Mark Lewisohn classifies it as a sitcom — and a ‘one-off oddity’ (London: BBC, 1998). Peter Fiddick, reviewing it in The Guardian, thought that

it did have its moments with Bob Hoskins as the slave […] demonstrating even here what a skilled actor he is. The mere fact of Diana Dors as Helen of Troy speaks for itself, and with such as Freddie Jones, as Menelaus, who’s fought for 10 years only to find his abducted wife is not feeling up to it, Annette Crosbie’s Kassandra, and Derek Godfrey as the adjective-rich messenger, there was the right sense of hair being let down but an equal sense that they were having to do it in a pretty ordinary sitcom. Carry On Up the Peloponnese.

He wonders whether ‘one of television’s own real end-of-series romps — those pirated tapes of mistakes and horrors from the actual production, which get brought out at TV Christmas parties — would have been a whole heap more fun. And Aeschylus might even have approved’ (‘Television: Of Mycenae and Men’, The Guardian, 24 March 1979, p. 12). Not a bad suggestion, although not one that you can imagine arising in BBC planning meetings!