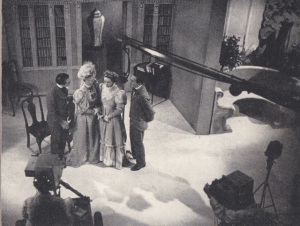 We are very pleased to announce that registration is now open for Theatre Plays on British Television, the first major conference to be organised by the AHRC-funded research project Screen Plays at the University of Westminster. The project documents and develops new critical approaches to the television presentation of these plays, seeking to understand the institutional, production, technological and aesthetic contexts for these adaptations within both broadcasting and British theatre. More can be read about the project’s aims and activities elsewhere on this blog.

The conference will tackle issues and topics within the broad area of theatre plays on British television from 1930 to the present. We warmly welcome participation from scholars and postgraduate students working on the histories of broadcasting, media, drama, theatre and culture.

Registration
The £25 conference fee includes lunch and refreshments. To register, please download the registration form and follow the instructions for
(a) submission of the form to Helen Cohen at Westminster and
(b) payment by cheque or online (n.b. select ‘MAD Conferences & Events’ from the menu).
Please register before Friday 5 October 2012.
Email Amanda Wrigley with any general queries.

Programme
The programme will consist of four panels, a plenary discussion and a screening event with wine reception, as below:

Lisa Bolding (Department of English, University of Georgia)
‘The Duchess of Malfi and early British television’

Russell Jackson (Department of Drama and Theatre Arts, University of Birmingham)
‘Stage to TV, Britain to America: the case of Peter Hall’s A Midsummer Night’s Dream, 1959’

Society and politics, media and genre

Amanda Wrigley (School of Media, Arts and Design, University of Westminster)
‘Theatre, Education, Television: the BBC and the Open University in the 1970s’

Spaces of television, spaces of theatre

Stephen Lacey (Cardiff School of Creative and Cultural Industries, University of Glamorgan)
‘Television’s natural disposition? An analysis of Naturalism and performance in relation to the BBC’s Performance series’

Screening with introduction (with clips from productions of plays by Fugard, Gorky and Shakespeare):

Lisa Kerrigan (British Film Institute):
‘Recordings and rediscoveries: the WNET collection at the Library of Congress and the BFI National Archive’

5 thoughts on “Registration opens for the Theatre Plays on British Television conference, 19 October 2012”