Roland Joffé’s film adaptation of John Ford’s play ‘Tis Pity She’s a Whore, produced for BBC Television, is rare in a number of ways. This is the only British television production of the Caroline tragedy, and indeed the medium’s only presentation of a drama by the playwright. Filmed by director of photography Nat Crosby, ‘Tis Pity… is one of a small number of television adaptations of classic theatre plays to be shot on 16mm film on location. And since its first transmission on 7 May 1980, it has been exceptionally hard to see, with no repeat showing, no VHS or DVD release and not even any fragments on YouTube. Tonight’s (sold out) presentation at BFI Southbank as part of the ‘Classics on TV: Jacobean Tragedy on the Small Screen’ season, organised with Screen Plays, is a rare opportunity to see it.

The neglect of ‘Tis Pity She’s a Whore is all the more regrettable because the film is a compelling drama, richly re-imagined for the screen, politically astute and with a clutch of exceptional performances, led by Kenneth Cranham’s fiercely insistent Giovanni and the wondering, knowing innocence of Cherie Lunghi as his sister Anabella. They play the incestuous couple whose forbidden love leads to multiple murders and the near-breakdown of the closeted society in which they, their family and the families of Anabella’s public suitors live. In the most authoritative modern edition, Arden Early Modern Drama: ‘Tis Pity She’s a Whore, editor Sonia Massai describes the play as ‘dark, elegant and spine-chilling’ (London: Methuen Drama, 2011, p.1) 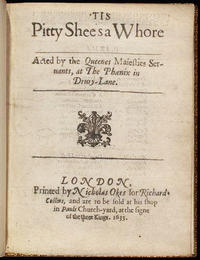 John Ford’s play was first printed in 1633 and scholars dispute how much earlier than this it was written. It was popular during the Caroline period, played briefly at the Restoration in 1661 (Samuel Pepys wrote of it as ‘a simple play and ill-acted’) and then disappeared from the stage for some 250 years. During much of this time, its central subject-matter of incest put it beyond the critical pale. The play was revived in Paris in 1894 and then by the Phoenix Society in London in 1923, but the first modern professional production was given by Donald Wolfit in 1940, since when it has been accepted as one of the most significant plays of the early modern period.

In 1972 Roland Joffé mounted a National Theatre touring production, in period costume played against a simple set of white drapes, and with Anna Carteret and Nicholas Clay as lovers. The following year Joffé joined Granada Television as a trainee director, and for the Manchester-based company he made episodes of Coronation Street, Crown Court and the Trevor Griffiths-scripted serial Bill Brand, about the life of a radical Labour MP.

Producer Tony Garnett brought him to the BBC in 1978 to direct The Spongers, written by Jim Allen (which can be seen at BFI Southbank on 31 May). Both this and the Verity Bargate-scripted No, Mama, No, which he directed in 1979 for ITV Playhouse, are powerful slices of contemporary social realism driven by a leftist politics (Joffé was for a time associated with the Workers Revolutionary Party). Both The Spongers and No, Mama, No are also shot on location and on film, the former by Nat Crosby, the latter by Ernest Vincze.

According to Martin White in his John Ford: ‘Tis Pity She’s a Whore, where he credits a personal communication from cast member Tim Piggott-Smith, Joffé was due to shoot a film about the painter Stanley Spencer (London: Palgrave MacMillan, 2012, p. 127). When this collapsed, he suggested an adaptation of ‘Tis Pity She’s a Whore. As a consequence, the film was made outside of the established BBC structure for classic theatre adaptations and it was scheduled in a slot dedicated to the Play for Today strand.

The text was adapted by Joffé, producer Richard Broke and Kenneth McLeish, known for his effective translations of Greek dramas. Elements of the language throughout were updated (‘gallants’ becomes ‘fellows”, ‘Call me not dear’ becomes ‘I am not your dear’), while what is perhaps the most egregious substitution attracted the critical wrath of Andrew Sinclair writing in The Listener,

Ford’s good line, ‘Oh, ignorance in knowledge!’ was removed for [Alexander] Pope’s most notorious one, ‘A little learning is a dangerous thing’… Texts are not sacred but they may be respected. Otherwise all the splendour of what is seen may be overwhelmed by anger at what is misheard.’ (‘The enemy within’, 22 May 1980, p. 662)

‘The most extensive interventions are made to the final act of the play,’ Martin White notes, ‘many designed to smooth out the shifts in Ford’s text that can present some difficulty in tracking the link between the characters’ words and actions.’ (John Ford: ‘Tis Pity She’s a Whore, p. 130) While some additions may jar, the overall effect is to create a fast-paced and largely credible period drama, which at many points allows Ford’s language to make a considerable impact. See, for example, the whispered attack of Alison Fiske’s glorious Hippolita on Soranzo (Anthony Bate) from Act II Scene 2.

Joffé and his colleagues transposed the play from Renaissance Parma to a northern country house in mid-nineteenth century Britain. Filming in fact took place at Chastleton House, a Jacobean wool-merchant’s estate built in the early seventeenth century, and where James MacTaggart had shot The Duchess of Malfi eight years before. The all-important urban context of the original is lost, as is much of the religious and intellectual context (it is arguable, for example, that for Ford, Giovanni’s embrace of incest is as much an intellectual challenge as it is driven by the passions).

The setting is that of a prosperous, agrarian bourgeoisie and the corruption of the society around the lovers becomes primarily financial. Martin White identifies how

Putana’s altered lines emphasized the priorities of this mercantile society where there is ‘bargaining, talking, dealing on every side’ rather than Ford’s ‘threatening, challenging, quarrelling and fighting’. (John Ford: ‘Tis Pity She’s a Whore, p. 129)

‘Tis Pity… was filmed during the first year of Margaret Thatcher’s first Conservative government, and the production is an effective if oblique riposte to the ‘Victorian values’ about the Prime Minister was so enthusiastic.

Filming in a contained world like Chastleton has practical advantages, given that urban exteriors do not need to be dressed in period, but the house also offered Joffé numerous opportunities to conjure up a claustrophobic world in which supposedly secret conversations can be overheard. Note how many scenes (including the first passionate kiss of the lovers) are shot as if being observed through doorways, and like James Taggart for Malfi, Joffé uses Chastleton’s staircases to suggest a world lacking all stability. There are other felicities of staging also, as when Giovanni declares his love to Anabella in what appears to have been their nursery, with that potent symbol of innocence, a rocking-horse, prominent in the establishing shot.

The escalating brutality of the play’s actions is observed dispassionately by the somewhat distanced camerawork of Nat Crosby, who shoots with muted colours and a style that echoes the social realism of The Spongers and other films from producer Tony Garnett set in contemporary Britain. By the end the affair Giovanni and Anabella may not have brought about the collapse of an urban polity and the takeover of Parma by the Cardinal, but the vicious authoritarianism of Soranzo triumphs and the household and estate of the good-hearted Florio is erased. The world is harsh and pitiless, whether the time and the place are those of late sixteenth-century Italy, of mid Victorian England or of the country in which the television audience was watching in May 1980.