More Synge on the small screen

A couple of weeks ago, in anticipation of the opening double-bill of our current ‘Edwardian Drama on the Small Screen’ season of screenings at the BFI, and the associated 23 May symposium (at which I’ll be speaking on Synge), I wrote a blog post on the 1960 BBC production of J. M. Synge’s Riders to the Sea which was originally broadcast in a schools television strand and repeated late one evening, some months later, for an adult audience. This production will be the focus of my talk at the 23 May symposium. As part of my preparation for that talk, and to provide some broader context, today I offer a brief survey of other plays by Synge known to have been produced on British television.

In that blog post of a week or two ago, I mentioned that Riders to the Sea had received its first presentation on the pre-war BBC television service in a production by the Dubliner Fred O’Donovan (tx 29 May 1938, with a repeat the following day). This was one of his first productions for the BBC and, as my colleague John Wyver has noted here, one of the first in a string of productions of Irish plays that he produced for television. O’Donovan also, it should be noted, produced the first of the six known television productions of Synge’s notorious masterpiece The Playboy of the Western World. O’Donovan’s Playboy was transmitted on 9 August 1946. In the next issue of the Radio Times it was announced that two further (live) presentations of the production would be given on 17 and 18 August, as testament to a certain amount of confidence that the play ‘promises to become a television classic’ (‘The Scanner’, ‘Television’, Radio Times, 9 August 1946, p. 24). Two years later, on 17 March 1948, O’Donovan turned to Synge again with a television production of The Shadow of the Glen, transmitted on St Patrick’s Day.

The Shadow of the Glen was produced again six years later by Chloe Gibson (tx 11 August 1954) and an anonymous reviewer in The Times (‘The Shadow of the Glen: Synge on Television’, 12 August 1954, p. 9) considered this production to have been a partial success: it is said to have conveyed well the farce of the ‘dead’ man awakening to surprise his wife and her potential lover, but where it was less successful was in effectively communicating the more serious resonances of the situation, such as Nora’s deep loneliness which sprang from the remote and isolated location of the cottage in which she lives with her husband. The acting, however, was considered to be very fine.

The important fact that I failed to mention in my earlier blog post is that the 1960 production of Synge’s Riders to the Sea for schools, which starred Sybil Thorndike (see image above), was not the first of Synge’s plays to be produced by the BBC in the relatively new television service for schools. In fact, almost a year earlier, on 17 March 1959, The Shadow of the Glen had been produced by Rosemary Hill as the final play of four offered under the English banner to schoolchildren aged 13-15 in the Spring Term of that school year. The English series opened on 13 January with a production of Marlowe’s Doctor Faustus, followed by The Life and Death of Sir John Falstaff (drawn from Shakespeare’s two Henry IV plays), in seven weekly parts from 20 January, then Chekhov’s The Proposal on 10 March, with Synge’s play bringing the series to a close on 17 March, St Patrick’s Day. The pamphlet of notes on the plays, published by the BBC for teachers, states that the play was being offered as ‘a dark comedy’ and a rich poetic feast. 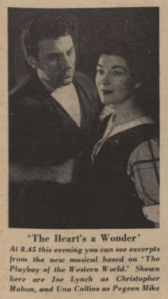 The year before, a forty-minute extract from The Heart’s a Wonder, Nuala and Mairin O’Farrell’s musical adaptation of The Playboy of the Western World, with airs taken from Petrie’s collection of traditional Irish folk music, was televised by the BBC directly from the Westminster Theatre, London (tx 30 September 1958). The Radio Times listing for this programme was, unusually for a theatre extract, graced with a production photograph of Joe Lynch and Una Collins as Christopher Mahon and Pegeen Mike (see adjacent image).

Later in the same year, on Wednesday 26 November 1958, a full production of The Playboy was offered on ITV in a Granada production by Cliff Owen. This Play of the Week production is, unfortunately, lost. What interests me in the TV Times issue listing this first ITV transmission of the play is the long description and discussion of the rioting which accompanied the first production of the play at the Abbey Theatre in 1907 (Anon., ‘Play Bill’, TV Times, 21 November 1958, p. 12), and how this echoes J. C. Trewin’s similar article on the riots accompanying the listing for the BBC’s first production of the play in 1946 (‘Hisses and Hullabaloo’, Radio Times, 2 August 1946, p. 27). Also lost is a second ITV presentation of the play just six years later. This Associated-Rediffusion production, directed by Charles Warren, was presented in the Drama series intended for secondary schools, but at its broadcast time of 2.59-3.24pm on 3, 10 and 17 March 1964 it was bound to have reached many people also watching from the comfort of home. (There is a file on this production in the BFI archives which I have yet to consult.)

The Playboy of the Western World was presented again on 15 July 1971, in a BBC2 Stage 2 production directed by Alan Cooke, produced by Cedric Messina and with strong performances from John Hurt as Christy Mahon and Sinéad Cusack as Pegeen Mike. This production exists still in the BBC archives, but the viewing copy (only the first part of which I have seen) is, confusingly in contrast with the listing in the Radio Times, prefaced by the banner for Play of the Month, not Stage 2. The luxuriously long opening, evocatively illustrated with Irish music, follows the figure of Christy Mahon as he runs across misty fields and walks by the sea – a sequence which underlines his solitariness in this remote environment. The shebeen (public house) in which the action is largely set is a small, creaky space which efficiently doubles as a front parlour and drinking establishment. Cusack’s Pegeen is as beautiful as she is fierce, and I can’t wait to watch the contents of reel 2 shortly to see how she portrays the loss of Christy at the end of the play. 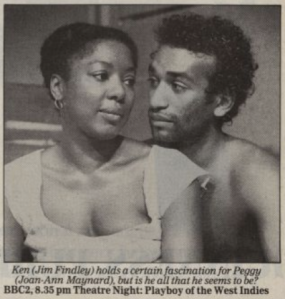 Over a decade later, a further BBC production of Synge’s masterpiece was broadcast on BBC2 (tx 13 October 1985), but in an exciting re-working by Mustapha Matura who had translated the action of the play from rural Ireland to Trinidad fifty years later than the original, at a time of mass emigration to Europe. ‘The credulous, the superstitious and the opportunists of Synge’s barbed play are not unique to Ireland. Nor are the tyrannical fathers unknown in the Caribbean’, considered Matura in an interview in the Radio Times (10 October 1985, p. 16). But Matura in this version has ‘done more than transport the events from a damp depressing climate to a baking sunspot’, writes Irving Wardle in an insightful review of the stage production in The Times (22 February 1984, p. 10). This Caribbean Playboy had been originally commissioned by Nicholas Kent who had staged it at the Oxford Playhouse and at the Tricycle Theatre in London in 1984. Kent also directed the BBC television adaptation of the production which, considered Mark Lawson writing in advance of the broadcast in The Sunday Times, offered ‘A great night in’: in particular, the ‘script stings when it has to and sings when it should, and the magnificent actors […] emphasis the wealth of black talent which exists’ (The Sunday Times, 13 October 1985, p. 56). I’m really looking forward to viewing the BBC archive copy of this production in due course.