The time since our last post has been far too long. We have no excuses, but our explanation includes the demands of intensive work on the database of theatre plays produced for British television that we will publish next year. My colleague Dr Amanda Wrigley and I are trying to enter details of 100 productions each week, and while we often fall short there are times when this task seems to fill every spare moment. We are also starting the editing process of contributions to our essay collection which will be published by Manchester University Press. Then there are preparations to make for our February 2015 conference and, also early next year, another screening season at BFI Southbank. So it does not feel as if we are slacking, but I fear that blog contributions have slipped down the list of our priorities. 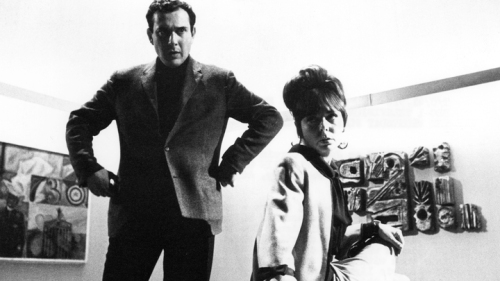 Seeing Philip Saville’s remarkable adaptation of Jean-Paul Sartre’s 1944 play Huis Clos at BFI Southbank has, however, prompted me to pen at least a short note. The drama was screened as part of the current season celebrating 50 years of The Wednesday Play, although as a production based on a classic of the European theatre, it was hardly a typical offering from the strand. In fact, as an opening title sequence revealed, it was commissioned by producer Peter Luke for his Festival series, but when this was cancelled by incoming executive Sidney Newman, In Camera ended up as one of the first broadcasts in the new series dedicated to dramas of the contemporary world. (You can find an online version at Open Culture here.)

Twenty years on from its first production, and in the midst of the social and sexual changes of the Sixties, perhaps the personal anguish at the heart of Sartre’s play felt more resonant. Today, and especially with the politics of war (against Germany originally, here the Algeria’s independence struggle with France) drained away, it feels at times absurdly over-wrought, its philosophical musings a tiny bit ridiculous (although I’m sure not for someone more engaged by Sartre than me) and certainly a good deal too long.

Sartre’s set-up, however, is dazzling. A man and two women are brought at their respective deaths to an austere room – a cell – in Hell. There are three benches and three contemporary artworks on the walls (might one – which can glimpsed on the left in the image – have been painted by Pauline Boty?), together with a single sculpture (after Reg Butler), a locked door, and otherwise only a standard paperknife on a shelf. There is no day and no night, no sleep, just the insistent company of the others, which of course leads to the most famous line, delivered here with aplomb by Harold Pinter as Garcin, ‘Hell is other people’. Also in the cast are Jane Arden (Inez), who was Philip Saville’s wife at the time; Catherine Woodville (Estelle); and Jonathan Hansen as the devil’s valet.

Working with a brilliant production team, including designer Clifford Hatts and senior cameraman Jim Atkinson, Philip Saville made the studio sing. There are frequent and often very brief interpolated film shots, which are flashbacks to the lives of the characters, but the bulk of the play was recorded with multiple cameras in what Saville revealed in the post-screening discussion were five versions of the same set. Each had one or more of the walls and the ceiling (a great rarity in studio drama) removed, so that the cameras could get in close to the action while retaining the illusion of shooting in a 360-degree space.

Numerous other visual techniques are employed both to achieve astonishing variety in the compositions and to heighten the drama’s intense claustrophobia. There is one remarkable rapid pan following Estelle as she runs in a circle seemingly right round the space. There are shots from below the characters and a framing taken from directly above the character’s heads. To achieve this, and to make the most of the five versions of the set, sections of the play were recorded out of sequence and edited together. Which makes all the more remarkable Saville’s recollection that he had just 2 days of studio time and before that only 10 days for rehearsals.

At the time, the Sunday Times television critic Maurice Wiggin was unimpressed: ‘There were several occasions when the theatrical cunning of Sartre and the director, Mr Philip Saville, persuaded one that something interesting was about to happen. Though it never quite did.’ (‘What has Sartre got to give the world?’, The Sunday Times, 8 November 1964, p. 44) In what was a mixed review overall for The Listener, however, John Russell Taylor was strikingly – and appropriately – enthusiastic about the talent of Philip Saville:

Mr Saville is the nearest thing we have – or probably are likely to get – to an Orson Welles of the small screen. Technically streets ahead of almost everyone else now working on British television, he shows enormous verve, drive and ambition in his productions; on the other hand, his taste is enormously unreliable, and he can and does make mistakes as alarmingly spectacular as his successes… no one who played safe could go so far astray, but neither could he be on occasion so triumphantly, unquestionably right.’ (‘Television of the month’, The Listener, 3 December 1963, p. 915)

« ‘An outside broadcast from the last century’: the Gaslight Theatre melodramas (BBC, 1965)
‘Classics on TV: Great American Playwrights’, a BFI Southbank season »