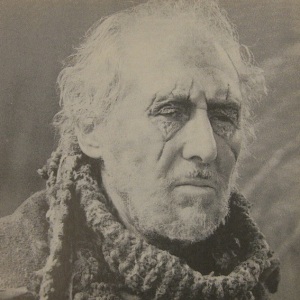 The Theban Plays, a trilogy of Sophocles’ tragedies Oedipus the King, Oedipus at Colonus and Antigone, was broadcast on BBC2 over three evenings of one week in September 1986 (and all three productions are available on YouTube). The plays were translated and directed by Don Taylor who would, four years later in 1990, turn to Euripides’ Iphigenia at Aulis which is, to the best of my knowledge, the last Greek tragedy to be produced on British television. My work on these four Don Taylor productions, then, forms the last chapter of my Greeks on Screen case study.

I wrote about Oedipus the King a week or so ago (here), finding it a lethargic production which was swept slowly along by a too repetitive orchestral score. The ‘old-fashioned populist’ Don Taylor, reported the Radio Times, was concerned to bring Sophocles out of the theatre and onto television for the appreciation of the ‘masses’ (Jim Crace, ‘Classics for Pleasure’, 13 September 1986, pp. 82-85), but he largely failed, it seemed to me, fully to explore what television could bring to Sophocles.

In this post I’m going to take a look at Oedipus at Colonus, the second part of the trilogy. Less well known than Oedipus the King, this play was written not long before Sophocles’ death towards the end of the 5th century BC. The blind Oedipus, banished from Thebes, comes to the grove of the Eumenides (deities of vengeance) at Colonus, close to Athens, accompanied by his daughter Antigone. An oracle leads him to believe that this is where he will die and Theseus, king of Athens, assures him that he will be safe here (and there is a reciprocal benefit, for Oedipus’ spirit will serve as a protection to Athens). Another daughter, Ismene, arrives to tell him of the quarrel between his sons Eteocles and Polyneices for the throne of Thebes. Then Creon, Oedipus’ brother-in-law, tries to bring him back to Thebes by force, so that Athens is prevented from having his posthumous protection. Theseus protects Oedipus and his daughters from Creon’s violent threats. All is calm – but now Polyneices enters, asking for his father’s blessing in his quarrels with his brother, but Oedipus curses both sons and, before long, peals of thunder signal Oedipus’ imminent death. 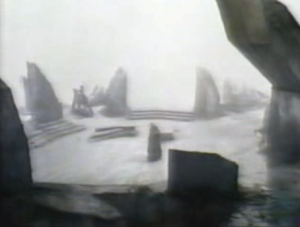 The large studio has been transformed from the royal palace of Thebes to a barren, rocky space with a roughly oval playing space. The backdrop is bright white, and shards of tall rock and horizontal slabs of stone punctuate the landscape. Off this space, to the right, is the grove of the Eumenides, positioned high up (so there is some scope for variety in the positioning of groups) and starkly lit in bright green to suggest its verdant, sacred and, perhaps, even other-worldly qualities. All action takes place in this one space, just as in Oedipus the King all action took place in front of the palace. Music, again composed by Derek Bourgeois, plays an important part in driving the action forward but this time it’s more various and sometimes playful – for example, when at the start of the play Oedipus and Antigone come across the grove of the Eumenides where, she says, nightingales sing, the score emulates birdsong.

These two productions in the trilogy are of course cast from the same mould, but there are important differences – partly relating to production decisions and partly to do with the play itself – which makes Oedipus at Colonus a more engaging production, despite its similar sometimes glacier-like speed (two hours and ten minutes to convey the action of less than 1800 lines of text). Peter Lennon, writing in The Listener, also found much more to like in this production than in the first of the trilogy:

If you are aiming at more than stocking the school video library you have to reaffirm the central energy of the work in terms that speak directly to modern mentalities without enfeebling it by forced modernisation. […] the dying man at Colonus speaks more successfully to our sensibilities. (‘You Wus Framed!’, The Listener, 25 September 1986, p.34.)

(Regarding modernisation, I wonder what Lennon thought of Channel 4’s transmission of Lee Breuer and Bob Telsen’s The Gospel at Colonus the following week, in which the gospel choir of a Pentacostal church tell the story of Oedipus at Colonus as modern parable?)

First of all, Oedipus at Colonus is constructed on a more human scale. Oedipus is now a blind old man, incapable of doing anything without the help of his daughter Antigone. He arrives at Colonus a beggar, unwanted at first and dependent on the generosity of the king. Anthony Quayle (1913-1989) plays this pitiable old man brilliantly (taking over the role from Michael Pennington in Oedipus the King), always making the most of Don Taylor’s unfusty, up-to-date translation and injecting the role with admirable energy throughout (impressive, since Taylor insisted on shooting the entire play in one take: Bryan Appleyard, ‘Interruptions like Oedipus make life complex’, The Times, 16 September 1986, p.12). At the start of the play there is also a wonderful performance from Paul Copley whose strong Yorkshire accent gives the role of ‘Local Man’ warmth and vigour.

Juliet Stevenson as Antigone and Gwen Taylor as Ismene play their parts in a natural manner with a lightness that provides welcome relief from, for example, the long sections of chanted choral odes. Whereas Oedipus and Antigone are dressed in rags, Ismene arrives in finery. Yet this isn’t made to matter: all three embrace warmly, serving to underscore simply the height from which Oedipus has fallen. The scenes involving Oedipus, Antigone and Ismene are in my opinion the best in the production because of their emotional accessibility. Many of the other scenes are man pitted against man (Theseus-Oedipus, Oedipus-Creon, Creon-Theseus, Oedipus-Polyneices) in confrontations which in this production run the risk of being a bit same-y. There is a good quantity of shouting. 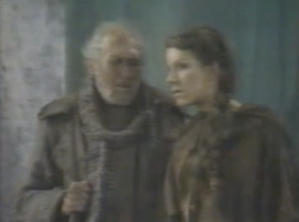 Stevenson returns a great performance as Antigone. She speaks with her facial expressions as much as with words. Her exhaustion is clear as she speaks with her father on first arriving at the grove: once she has helped him to sit down, she herself sits next to him with a sigh and a tired gaze; she stretches, exhales, but never tires of answering her father’s questions or offering her help. When, a few minutes later, Oedipus addresses the Eumenides directly, the camera zooms in on him slowly, during which we cut across three or four times to her watching her father: through observing her clear-eyed gaze we understand all the more the pitiful state of this blind old man who has been cast harshly on the waves of fate. When, shortly after, she leads her father down the steps of the grove to leave him to answer the questions of the chorus of Old Men, her face conveys her anxious uncertainty whilst her voice grasps at confidence. In the twenty-seven seconds it takes for Oedipus to relate the immense support he’s had from Antigone through their difficulties, her expression charts the topography of his memories – ‘ever since she grew up and became a woman instead of a girl, she has been on the road with me, my nurse, my guide, my governess! In wastelands and forests, often without shoes and hungry, drenched by the rain, sunburnt, exhausted. It has never crossed her mind to go home and live comfortably, to look after her father, to get bread between her teeth has been his first concern’. Her expression is, in turn, adoring, thoughtful, smiling, upset, finally regarding her sister Ismene with a resolute and pained expression. It is at this kind of moment that the production works well. The play feels at home in the medium. 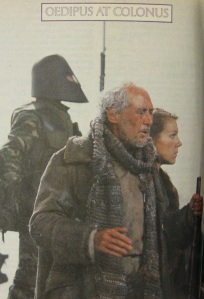 These really nice moments are, however, too few and far between. The Chorus are as stodgy as they were in Oedipus the King. When they ask Oedipus who he is, they encroach on him on either side in two flanks, speaking and moving in unison. The sense of them closing in is effective, but when the two flanks jump back from him in unison a minute or so later, on hearing his name, the formality of the movement seems clunky and mechanical.

John Shrapnel as Creon is the only actor to appear in a central role in each of the three plays. In Oedipus at Colonus he is every inch the bad guy – a foil to good-guy Theseus (played by Clive Francis). His entrance is heralded by a squad of menacing helmeted soldiers carrying rifles with bayonets (see adjacent image), yet he says ‘I haven’t come to make trouble’. Shrapnel’s Creon has become supercilious and threatening, and his potential for violence is exemplified in his seizure of Ismene and Antigone and threatening Oedipus with a knife, yet his power over Oedipus and his daughters is – in this play, at least – overruled by Theseus’ authority.

My next post will turn to Antigone, the third play in the trilogy, and – given the performances of Shrapnel and Stevenson in Colonus – I’m really looking forward to it.

« Beyond the boundaries: intermedial ideas in Paris
Stage 2: The Duchess of Malfi (BBC, 1972) »