The third screening in our Classics on TV: Great American Playwrights season at BFI Southbank this month is of the 1976 Granada for ITV production of Cat on a Hot Tin Roof, Tennessee Williams’ 1955 Pulitzer-winning play of a Deep South family in crisis. Robert Moore directs this sumptuous production, starring Laurence Olivier, Robert Wagner and Natalie Wood.

Book your ticket on the BFI website here for the 6.20pm screening on Tuesday 13 January 2015. Details about the rest of the series can be read here.

There have been around ten productions of Tennessee Williams’ plays produced on British television. Happily, the only two of these productions that survive in the archives are both being shown, in different seasons, at BFI Southbank in the same week of January. The 1958 play Suddenly, Last Summer was given in BBC2’s Performance strand on 6 November 1993, and this Richard Eyre production, starring Maggie Smith, Natasha Richardson and Rob Lowe, is being shown in the Maggie Smith season just two days after Cat on a Hot Tin Roof: read more about this production and book your ticket here.

Robert Moore’s Granada for ITV production of Cat on a Hot Tin Roof, starring Laurence Olivier as Big Daddy (who is dying), Robert Wagner as his alcoholic son Brick and Natalie Wood as his dissatisfied wife Margaret (‘Maggie’), was transmitted on Sunday 12 December 1976, from 9.05 to 11.00pm. 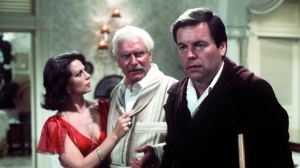 his was the second in a series of six great plays of the twentieth century which were transmitted on ITV from 1976 to 1978. The selection of plays was by Olivier, who also acted in five of them, co-producing several and directing one. Olivier is reported as saying that ‘I have stood out stiffly and coldly and pompously about television for too long. I belong to an age to which television belongs and one has to get on with it’ (‘Lord Olivier Takes on TV Roles’, The Times, 21 May 1976, p. 4).

‘Part of the excitement of the series will be watching [Olivier] tackling modern parts he has never done on stage’, noted Michael Ratcliffe in The Times (‘Television’s Own Olivier Theatre’, The Times, 6 December 1976, p. 12). Having seen the broadcast of Cat on a Hot Tin Roof, the critic B. A. Young considered that ‘The playing of the principals was as good as one is likely to see often on television’:

Mr Wagner set a mood at the outset and held it throughout, his forehead slightly creased to register his distaste with the world’s mendacity, but it was the right mood and when he was required to emerge from it he did so with the right degree of challenge. Natalie Wood’s Maggie the Cat, her charms directed unerringly in every direction where they might do her some good, somehow contrived to show her belief, naive though it might be, that what she was doing really was for the best: a matchless performance. Olivier gave Big Daddy a look of home-made aristocracy, wavy grey hair and grizzled moustache against a face in which blood-pressure was discernable […]. His amalgam of selfishness and obstinate affection for his disappointing son made for some moments of effectively restrained passion. (B. A. Young, ‘Cat on a Hot Tin Roof‘, The Financial Times (14 December 1976, p. 3.)

This lavish production, designed by Peter Phillips, has visual resonances with big American series such as Dallas that would be transmitted in Britain in the following decade. The high ceilings, chandeliers and servants of Big Daddy’s mansion work to suggest inherited wealth, rather than the self-made fortune of a working man, and the necessary softening of the sparkier elements of the playtext also work towards this impression. As Philip C. Kolin, writing in the 2010 Methuen Drama edition of the play, considered, ‘Olivier looked more like a stately elder Mark Twain or slimmer Colonel Sanders projecting an aristocratic Big Daddy, not the self-made, coarse man Williams imagined’ (pp. lxii-lxiii).