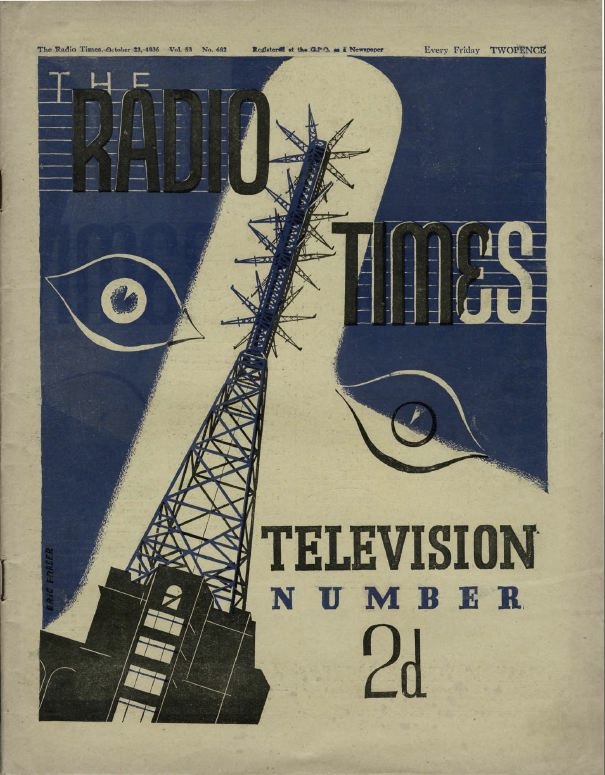 Scenes from the Scottish comedy Marigold are recognised as the first elements of a stage play to be broadcast by the new BBC Television Service after the start of its transmissions in early November 1936. The extracts from Marigold, which was then running in the West End, were shown on Friday 6 November. These were not, however, the first dramatic extracts to go before the Alexandra Palace cameras. At least two other current stage plays, The Insect Play and The Tiger, supplied scenes used in the experimental broadcasts during the month or so before the official opening on 2 November. Marigold will be the subject of a blog post next week but today I want to explore what we can reconstruct of the second of those experimental presentations, The Tiger.

Following the ten days of broadcasts from Alexandra Palace directly to Radiolympia in late August and early September 1936, BBC Television began its more general experimental transmissions on Thursday 1 October. Programmes were shown between 11am and noon and between 3pm and 4pm each day apart from Sunday. As The Times reported, curious Londoners could go to the Science Museum to see these first broadcasts on a specially installed receiver (‘Television Demonstrations’, 1 October 1936, p. 10). The Southern Railway also began to show the broadcasts in the waiting room opposite Platform 16 at Waterloo station — although you had to have a train ticket to get in. But these initial tests were plagued with problems:

During the programme and at the end the announcer apologized for technical faults caused, in one instance, he said, by a temporary failure of the water supply which cools the valves of the transmission installation. In the early part of the programme there was a great deal of distortion of the pictures, but there was a great improvement towards the end of the hour’s broadcast. […] Oscillation and interference played strange tricks at first, but the final film was perfectly clear. (‘ “Technical hitch” at first regular programme’, The Times, 2 October 1936, p. 12)

News films were used in these broadcasts and the system was also tested with studio programming, including the cartoonist Mr Bruce Bairnsfather, some ballet and the first editions of Picture Page. Scenes from the annual North London Exhibition, held at Alexandra Palace, were also shown, as was a parade of new cars from the Motor Show. It is difficult to reconstruct the precise content of these transmissions, since neither Radio Times nor the broadcast listings in The Times offers any details. But the programme file for The Tiger held at the BBC Written Archives Centre documents its inclusion in these first schedules (WAC T5/528).

The Tiger is a play by Reginald Berkeley about the French statesman Georges Clemenceau. According to a note in the programme file, extracts from a London production at the Embassy Theatre were originally planned to be presented in the Alexandra Palace studios as From the London Theatre on the afternoon of 16 October. But then the show was swapped with another West End drama, The Insect Play by Josef and Karel Capek, which had been scheduled for the following day.

When The Tiger did go before the cameras on 17 October, there was bad news and good. The planned transmission could not take place because the problematic Baird system, which was alternating with the more reliable Marconi-EMI apparatus, could not be got to work. Yet programme planner and producer Cecil Madden reported to head of the television service Gerald Cock that he was very pleased with what he had seen on the closed circuit screens at Alexandra Palace.

In my opinion [the tests] were completely successful, an ideal play for our medium. The extracts well chosen and effectively produced in close-ups throughout, with [theatre producer Ronald Adam] making linking speeches. [George] More O’Ferrall is to be congratulated on his skilful handling of the production, which bears out my contention that the whole secret is in the method of presentation. (‘Report on The Tiger‘, 19 October 1936)

Such was the success of the test that the company of six, including William Devlin who played Clemenceau, was invited back to reprise the scenes after the full service had gone on air. On 23 November producer George More O’Ferrall once again oversaw the presentation, and he extended the studio elements with film scenes taken from the G. W. Pabst feature film Westfront 1918 (1930) and from a British Movietone News item about the armistice. For the test the full fee for the cast and production rights was thirty pounds, and the second time round the theatre management earned seventy-five pounds for two performances. Copyright in the text had to be cleared separately, at a cost of two pounds per performance.

On the day after transmission the broadcast was the focus of one of the very first extended reviews of a television play — or indeed of any television programme (Marigold had not been honoured in this way). An anonymous writer in The Times reported that ‘For those who had not previously seen television in action the experience was a memorable one.’ Invited to the Marconi theatre in Tottenham Court Road to watch the drama, the reviewer admitted that there was ‘something definitely alarming’ in the thought that what was on the screen there was simultaneously being performed at Alexandra Palace.

The screen flickers; it imposes a strain upon the eyes; the coat of M. Clemenceau was at one moment impressively dark and at the next had faded to the dingy white of an improvident umpire, but there was achievement and not merely promise in every minute of the 30 the television lasted. Faces are recognizable, voices are audible and capable of expressing shades and modulations of feeling and those scenes which were taken from a film and incorporated in yesterday’s scenes from the play, and which show the fighting on the Western front in 1917, are, curiously enough, more impressive than their originals in the cinema. It may be only the smallness of the screen that accounts for the impression of design, but as the shells burst and men cross no-man’s land it is as though an album of clear and well-conceived photographs is being turned page by page. In the scenes occupied by Clemenceau the limitations of the space magnify the man and seem to keep stationary what is actually moving. (‘Televising a play’, 24 November 1936, p. 12)